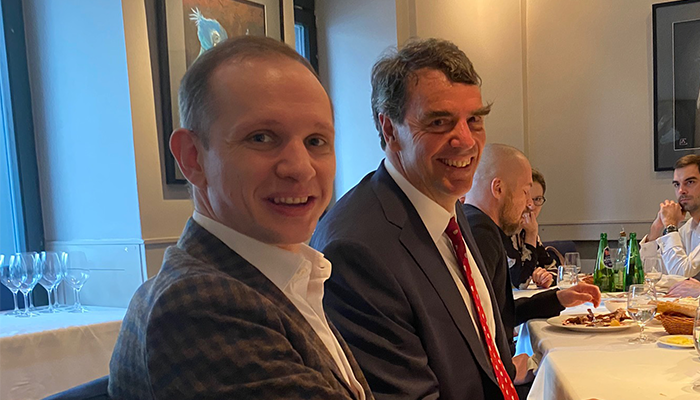 Tim Draper inspired generations of VC entrepreneurs across the globe. With 35 "unicorns" behind, he is a true legend of our industry. This week our partner Donatas Keras had a unique opportunity to spend some quality time with Mr Draper, share the ideas, learn his tactics and know-how, discuss some regional investment cases. They also did discuss and set a bridge for possible future cooperations and co-investments in the Baltic region.

The meeting was organised by our partners, a Polish venture capital firm OTB Ventures, which has joined the Draper Venture Network.

"We are about to see the golden age of Eastern Europe,” says Tim Draper, the billionaire Silicon Valley venture capitalist, who is today announcing the addition of Polish venture capital firm OTB Ventures to his Draper Venture Network.

The Draper Venture Network is an alliance of 22 venture capital firms across the world who share intelligence on deals and best practice, often co-investing on deals.

Partnering with OTB will give Draper a window into the Central and Eastern Europe (CEE) region where Marcin Hejka, managing partner and co-founder of OTB Ventures, estimates that there are some 10,000 startups that have raised first funding rounds in the last five years and are now reaching the stage of maturity where they can go global.

Draper, whose investments include Tesla, SpaceX and Twitter, is not the only US venture capitalist to recently shift focus to Europe, where startup valuations look comparatively much cheaper than in America. Silicon Valley legend Sequoia is increasingly active in the region, and US participation in European funding rounds is growing. In 2019 19% of funding rounds into European startups included an American investor, compared with just 7% a year earlier, according to Atomico’s State of European Tech report.

Draper, who founded DFJ and Draper Associates, already has experience of investing in Eastern Europe — DFJ was an early backer of Estonia’s Skype and owned 10% of the company when it was sold to eBay for $4.1bn.

He met the OTB team through co-investing in Iceye, the Finnish microsatellite company.