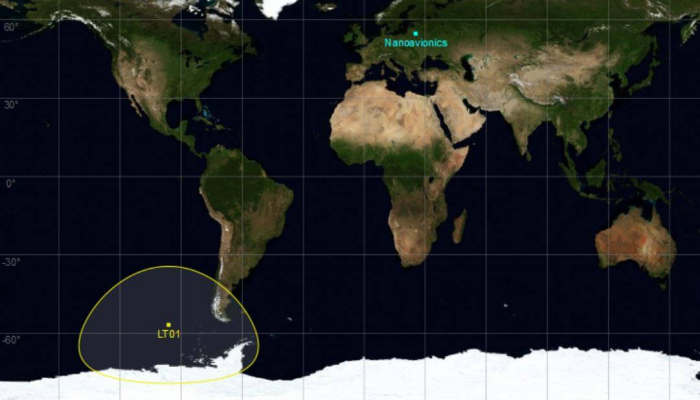 Lithuanian nano-spacecraft equipment maker NanoAvionics has announced the company secured some 3.2 million euros ($3.7 million) in funding to commercialize its Enabling Propulsion System for Small Satellites (EPSS) and performed a successful in-orbit test of its chemical propulsion system onboard a CubeSat.

The EPSS “provided the 3U CubeSat LituanicaSAT-2 with 10 cm/s of delta-V, making an evident change in its orbit parameters,” NanoAvionics said in a statement. The CubeSat was launched into a polar sun-synchronous orbit June 23, and the test was performed July 5.

The company’s senior management says that NanoAvionics is confident about the commercial potential of its system, and the market forecast for the global smallsat market is quite optimistic.

“Despite the obvious growth in numbers small satellites, in particular constellations, are becoming strong competitors to their big counterparts,” Vytenis Buzas, the chief executive, and co-founder of NanoAvionics, told SpaceNews. “We see that there are lots of new serious projects being backed by governments and [venture capital investors] to launch more new constellations, proving the business applications will find their way to start generating profits in the near future.”

Company representatives say that the propulsion system will lower the cost of small satellite constellation operations by an estimated 80 percent, and therefore, it could make space more affordable to a wider range of organizations around the world.

NanoAvionics acquired the funding to further develop the EPSS under an ‘Intelektas LT’ grant which is distributed to local innovative entities from funds obtained by the Lithuanian government from the European Union. The Vilnius-based business launched one of the first Lithuanian satellites, LituanicaSAT-1, and last year, NanoAvionics initiated a partnership with Kubos and commissioned the U.S. company to develop software for the latest LituanicaSAT-2 mission.

NanoAvionics says that the length of the first initial experiment was very short, at just two seconds, and, owing to this, the apogee of the LituanicaSAT-2 increased by some 200 meters. The average developed thrust was 127 mN, according to preliminary data obtained by NanoAvionics. The aim was to prolong the orbital lifetime of LituanicaSAT-2 by a factor of four. The company says that the demonstrated performance of the EPSS indicates it could accelerate commercial and scientific smallsat space missions.

To test the EPSS, NanoAvionics says it ran a cold-start program, followed by “a train of pulses with a total duration of 2 seconds, reaching a 0.3 g mass of the monopropellant [that was] to be used.”

The average thrust reached was 127 mN, “followed by steady peaks of 300mN, demonstrating that the system works nominally as planned. [An] orbital change of approximately 200 meters was observed, analyzing TLEs of the particular epoch when the experiments were performed,” the company said. “The telemetry data of the satellite, together with information provided by NORAD, evidenced [the] successful completion of one of the mission-critical tasks, demonstrating the feasibility of the propulsion system’s use on similar small-scale satellites.”

According to the firm’s chief executive, the global “small satellites market demonstrates significant growth and shift towards professional commercial applications through growing requirements”.

NanoAvionics says that its system runs on a non-toxic ‘green’ monopropellant, based on an ammonium dinitramide (ADN) blend that outperforms hydrazine which is today’s most commonly used monopropellant. This is to ensure the system’s compliance with NASA’s and ESA’s Clean Space Initiative.

Under the plan, the EPPS is to be made commercially available early next year. The system has already attracted the interest of a number of major satellite manufacturers, and there are ongoing negotiations with pilot customers, according to NanoAvionics.

The EPSS is to be also integrated within the company’s Multifunctional 6U Platform (M6P), the next generation nano-satellite that is to allow operation of smallsat constellations at one-fourth of the current budgets.

Set up in 2014, the Lithuanian company is a smallsat system mission integrator that provides components and platforms. In the first phase of its development, NanoAvionics raised venture capital and secured funding for its R&D activities from the country’s government. Work on developing the EPSS began as early as in 2009, in partnership with the country’s Vilnius University.