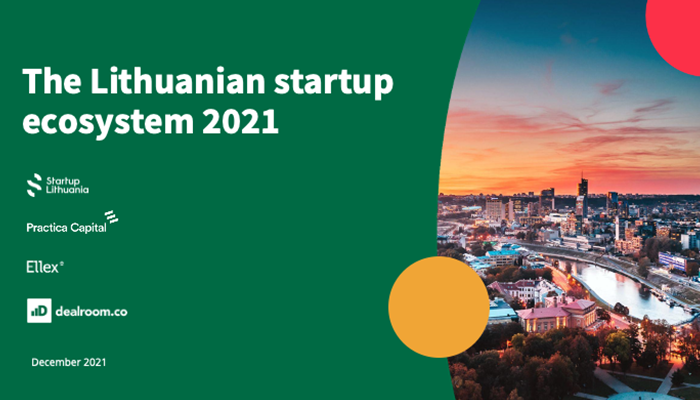 These insights are presented in a review by Dealroom.co, an international startup data platform, and will be further overviewed at today’s Wrap Up of 2021 & Startup Awards event. It analysed the startup ecosystems, venture capital and the dynamics of attracted investments in the Baltic States and the CEE region. The study was initiated by Startup Lithuania, the startup ecosystem development unit of Public Institution Enterprise Lithuania, Practica Capital, a Lithuanian venture capital fund, and the law firm Ellex Valiunas.

Dealroom.co’s review shows that Baltic startups have collectively attracted a record investment of around EUR 1.8 billion in 2021, 3.8 times more than in 2020, and the total value of startups in the Baltic countries is now EUR 46 billion. This year was also exceptional for the number of unicorns, with the review showing that the Baltic countries accounted for almost a quarter of all unicorns in Central and Eastern Europe.

The year 2021 was also exceptional for Lithuania’s startup ecosystem, with startups attracting a record amount of investment of more than EUR 420 million, and the total value of Lithuania’s innovative businesses reaching EUR 7.1 billion, a 17-fold increase since 2016, according to the review. It is also worth noting that in the CEE region, Lithuania ranked 5th in terms of venture capital investments, 2nd in terms of the number of investments attracted by population, and 9th in terms of Europe.

As Roberta Rudokienė, Head of Startup Lithuania, said, this shows that Lithuania is approaching the maturity of the startup ecosystem.

“This year, Lithuanian startups have shown exceptional results – not only have they attracted record investments, but they have also achieved other high indicators: the number of employees in startups grew by 15% over the year, and the growth in exports of their higher-value-added goods and services reached 192%, which is 2.9 times higher than in the first half of 2020.

It seems that the Lithuanian startup ecosystem has reached a spurt stage and it is likely that in the future we will see even more growth in the ecosystem: we will see new records, new unicorns, and startups will become an even more important part of the Lithuanian economy,” says Roberta Rudokienė.

Arvydas Bložė, an investor and partner at Practica Capital, agrees: „Lithuanian ecosystem is at an inflection point. Not only do we see ATH amounts raised from top names among global VCs, but the first bunch of millionaires from within the ecosystem: angels via secondaries and, most importantly, early employees via ESOP schemes. This financial success will draw more talent to take risks and more capital available at the earliest stages. This will fuel the ecosystem for better outcomes. The best is indeed yet to come.“

The legal framework is also changing

Given the current growth and prospects for startups, the tax and legal environment in Lithuania and the other Baltic States is highly favourable and at the same time enabling technology companies to grow and attract investment from local and global venture capital funds. Rūta Armonė, Associate Partner at Ellex Valiunas, noted that 2021 brought significant transactions to the market, such as the IPO of Baltic Classifieds Group or the sales of Dokobit, Deeper and Paysolut.

“We expect that this strong growth momentum will trigger significant and large-scale exits through IPOs or M&A transactions. Thus, the region has created a snowball effect as technology developers with capital from successful divestments are likely to be willing to invest in the next wave of startups.

The legal environment is also changing to meet the current needs of the ecosystem. Recent changes in the tax treatment of options have put the Baltic countries among the leaders in Europe. According to the Index Ventures ranking, the Baltic region has the most favourable stock option regulations in the world, making it easier for startups to attract and retain talent. Policy makers understand the needs of the ecosystem and we encourage new initiatives to also focus on a more favourable legal environment for future investments,” Rūta Armonė shared her thoughts.