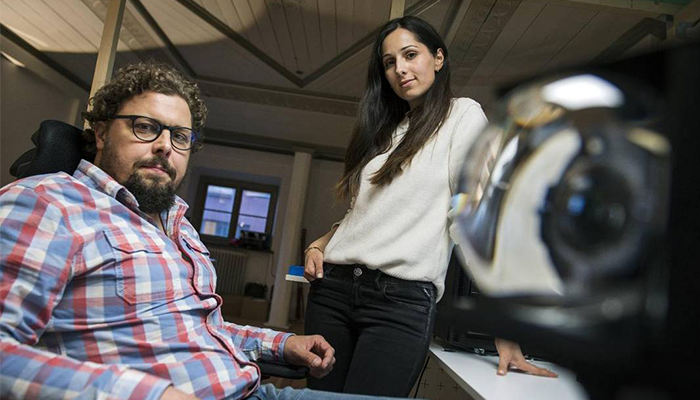 The end of the year was quite successful for Zero Parallax, a company that develops the image capture technology for virtual reality and industrial applications. Zero Parallax won both the Innovator Team of the Year Award at Guldgalan 2017 and VR/AR track for innovation in sports at Slush side-event Smash.

The Lithuanian-Estonian startup, founded by Vygantas Kirejevas and Gajane Kalatshjan, has started its’ journey seven years ago in Estonia and currently is based in Åre, Sweden. A small company is determined to create a virtual reality revolution. Now, both Hollywood and well-known camera manufacturers are in line to use their technology.

Capturing 360 degrees of reality is relatively easy. You simply aim a number of cameras in all directions and press "record". But when you have to process and produce a seamless virtual reality image, that’s when the problems arise. The cameras have naturally been positioned in different locations and therefore have different perceptions about the distances between foreground and background objects in the image. The difference in viewing angle is called parallax, a word from Greek that translates into movement.

In order to create a virtual reality movie, a post-processing is required where the many images are edited together (so-called "stitching"). In that work, parallax is a difficult or even impossible obstacle. For example, some portions of the image may look unnatural, with a seemingly blurred double exposure.

That is how a whole video ‘stitching’ industry has emerged. There is a variety of special software, whose developers are all trying to tackle the problem of parallax. Post-processing companies can charge as much as $ 100,000 per ready-made minute (something that can take up to a week to do). Hardware companies like Nvidia build expensive graphics cards to make image processing less time-consuming.

When the company started, they started producing training materials for planetariums. Sewing a 20-minute film could take them eight months. Vygantas, a business developer who was used to converting new technology to commercial products, felt that the situation needed to change. However, none of them had any greater knowledge of optics.

"This is probably the reason we managed to do this at all. If I had been an expert on optics, I'd probably abandoned the idea a long time ago. But I started to read on the subject and felt that there should be a logical solution to the problem.”, said Vygantas.

After a while, the couple understood that the only solution was to develop their own hardware. A new type of camera lens. To find the right expertise they traveled "around half the globe" and visited the factories where cameras are manufactured. In the end, someone spoke of a guy in Frankfurt who "can do really crazy things with optics".

Igor Gurevich holds a master's degree in optics after studying at ITMO University in Saint Petersburg. For many years he has lived in Germany and has designed lenses for Carl Zeiss. He agreed to listen to Vygantas Kirejevas ideas - just to immediately dismiss them.

"It took us about three months to explain our concept to him and what we needed. Now he is part of our team”, says Vygantas Kirejevas.

A few months back they’ve presented their technology and showed a movie made using this technology at International Broadcasting Convention in Amsterdam, Netherlands. The reactions were great.

“People from the BBC came up and asked us how long it took to edit the movie. I replied that I did the movie the night before in 20 minutes. They could not believe this, the reactions were similar from everyone we talked with, from the biggest studios in Hollywood, to industry and television companies in Scandinavia, the majority of them wanted to know when they could get this technology”, says Vygantas.

The company is called Zero Parallax and the name says what it's all about: with their technology, film producers release the parallax errors that can occur when using multiple cameras. But in addition to the special lenses, Zero Parallax makes further groundbreaking technology that will be included in their cameras. It is simplified that the images taken with Zero Parallax cameras capture measurable data.

The company sees many applications, including remote control, self-propelled vehicles and construction projects. Today, they have already started few partnerships with global camera manufacturers and plans to manufacture their own professional cameras designed for Hollywood studios and major television production companies in Europe.

The founders believe, that with their technology, a larger group of creative people can create their content, easier and faster. They really believe they can make virtual reality into something that's mainstream.